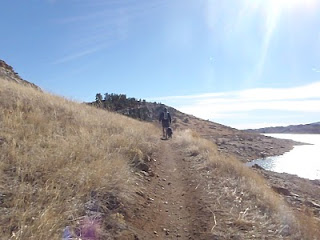 Last night I ventured into something that I never thought I would do. You see - I run a few times a week; on average about 4 miles at a time. I like and enjoy it and want to push myself to do more - I almost consider myself a runner (well not after tonight).

I've always wanted to join a "running group/club" to run with people for fun and gain acquaintances and make running a little more enjoyable. So as soon as we got here I started trying to find a group online to run with. I ran across a group called Fort Collins Trail Runners. I looked at it, then I contacted the "leader" and made sure it was a legitimate thing and not someone trying to prey on women. They meet on tues and thurs nights and do trail runs. Tuesday's run seemed doable to me - just shy of 4 miles (which I run 4 miles often throughout the week, so no big deal, right?). They say over and over - all levels welcome. It's just a social pleasure run.

Yesterday was the first day I could go. I've been in the midst of potty training (which by the way is going pretty well just exhausting) and Richard thought it would be good for me to go meet some new people and enjoy a run.
Well let me tell you - TRAIL RUNNING IS SUPER HARD!!!!!!!!!!!!!!!!!!!!!!!!!!!!!! So different than Flat land running! The first half mile I was going to die and I was seconds away from just turning around and going back to my car and never seeing those people again. My lungs were burning up, I thought I was going to pass out! It's so much different running up hill on a trail that is rocky and switch back and steep.
Then to make things worse - these people are hardcore runners. Like the woman leading this trail run, runs about 100 miles a week. Like the lead guy has done a 100 mile race. Like the nice girl who stayed back with me near the end is training for a 50 mile race, like they've done multiple marathons!!!!!!!!!!! What was I thinking????????????????
I made it through the whole trail, I walked a lot on the up hills, they were so nice to me about it all and even told me I should come back out! (and some of them walked too) That this was a faster group b/c of the rain, that usually there are slower ones who come out and run. In the end I'm glad I went. It pushed me harder than i wanted to be pushed, it challenged me to step way out of my comfort zone to go and meet random people to run. And who knows - maybe you'll see me one day in the next 50 mile woman's race. :) ha just joking!!!!

And guess what I did when I got home - you guessed it - a big bowl of ice cream and brownies. :) I should sleep good tonight!
If you care to see pictures of the trail and how incredibly hard it was go HERE. and if you don't believe me it was hard!
Posted by Unknown at Wednesday, September 07, 2011

Good for you on getting out of your comfort zone and trying a new type of run! My first thought was that the change in altitude in Colorado alone would make your running harder til you got used to it. Keep at it, you are doing great! :)

Wow - I can't believe those people run so much! They are really hard core runners. So, my question is, will you be going with them again? Are you joining the club? I think you do so well running as it is, so just keep up the good work!