The worst Parade Ever!

I know the title sounds depressing, judgmental and negative - but it is true.
Needless to say I was very disappointed. :(

You see, I like to make events like this special for the kids and to experience things and just enjoy things. I had it in my mind that we were going to a nearby town for their supposed Parade Festival of Lights. I looked online and it stated they were doing snow sculpture competition things and little things going on all day and from 4:30-6 was the parade of lights.  We were busy during the day, so we planned to just attend the parade. I was so excited about the fun family festive outing we were going to experience.

Well we got into the town and parked close by around 4:30pm just in time, but mind you, it's still not dark yet, dusk, but not dark. So in my mind "they could not be starting yet".
We find a bathroom very close to the happenings of the town. And can see the sculptures on the road and the road blocked off for parade. So we think, we'll stop for bathroom really fast, then walk up towards the parade and look at the cool ice sculptures on our way. Well as we are waiting in the bathroom I notice/hear parade start, so I say, "we have to hurry". So we run up, noticing the all of 5 ice sculptures, and find our spot along the road. We knew we had missed the beginning but thought we still had plenty of parade left. B/c it's a parade of lights afterall and it's just now getting dark enough to appreciate the lights.

So Richard sets up our chairs, we put a blanket over the boys to stay warm and settle in for the long haul. I was psyched thinking this was going to be so special. 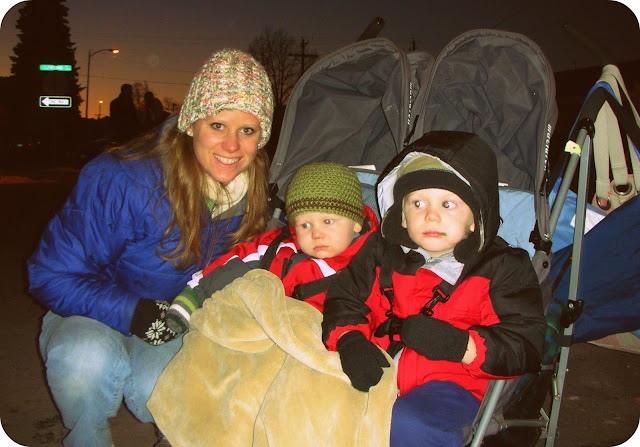 I've never been so disappointed to see Santa at a parade. So so sad!!!!

The boys just sorta sat there and had no idea why we dragged them out there for that, and what the big hype mom was making about this whole parade thing.
Oh well, next year we will definitely go to a different city and try a different Festival of lights. hahaha 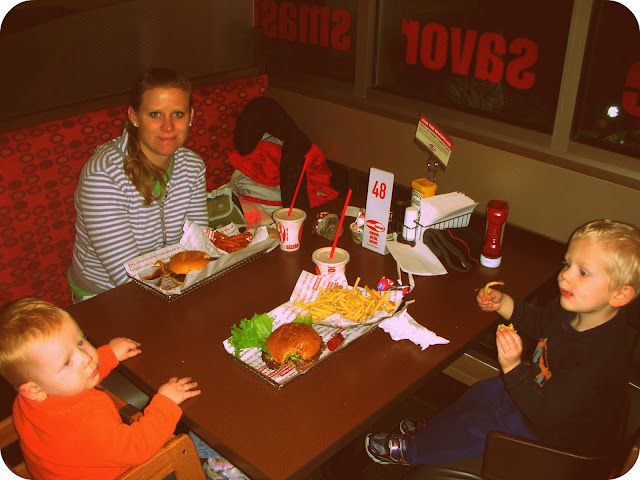 So instead, to help our downheartedness about the parade we went to Smashburger for the first time. I loved their sweet potato fries. It was still a fun night out as a family. But boy! What a disappointment of a parade.

Has this happened to anyone else? Does anyone have any funny stories about parades or fun events that turn out lame?

Yes! I understand! In my home-town we have a memorial day parade that is probably only 4 things long, like that. It's pretty sad. Every year we go to it thinking it's gonna get better..and it seems to get worse. i don't know why we torture ourselves...haha! It makes the occasion feel cheated. So sorry you went through all that trouble!! it makes for a great story, though...lol!

That stinks! I hate bundling up the kids for just a little while. We like to go to the city near us, and drive the car through the bug light display that they have. It stays warm in the car, and the kids get to see everything!

Wow what a lot of work for umm nothing. At least it was when they were little and maybe they just won't remember and next year you will find a HUGE one to make up for this year!

I'm so sorry but I laughed when I read about how the boys were wondering what the hype was about and why their mother was so excited about this event that they probably didn't even really see!!!! What a great memory and something you'll probably never forget - or probably never repeat to do, but repeat as a story for years to come!!!:-)

Oh yea, and, what a great way to make it not as disappointing - going to a restaurant! That would have made it ALL worthwhile for me!