How Could I have missed it!

oh I know - we had a super busy celebratory weekend. :)
I'm talking about Landon being 8 Months old. he turned 8 Months old on Mother's day!!!!! Boy i can't believe it. He is so much fun. Really and truly he is at a perfect stage right now. He takes 2 naps very regularly - he eats 3 meals a day, and he is sleeping like 12 hrs at night. And he is pretty consistent. B/c of his consistency he is pleasant little guy. He can sit up finally! and it's so nice for me to just sit him somewhere. He can spin around on the floor and roll around. But he isn't too close to crawling yet. He sorta is starting to pull his legs up under him, but mostly pushes the toys away from him, and then gets frustrated b/c he has nothing he can reach to play with. he smiles ALL the time, but doesn't laugh out loud too much. But when he does - it's so cute and we love it. He loves his momma - that's for sure. It seems to be getting a little worse, but I don't mind it yet. I'm not worried about that. He loves Carson just as much I think. They are so funny together. I can hardly feed landon b/c he's always turning his head to find where carson is. ha - it's funny. he has tons of teeth. I think like 6 or something. (side note: I think I'm the only mother that has a hard time knowing how many teeth they have. #1 -he bites my fingers every time i put them in his mouth; #2 he twists and turns and he doesn't like my fingers to be in his mouth #3 between the slober, normal bumps, and rigged teeth how do you know how many there are. so I just wait until they are big and then count them. ) Nevertheless - he is teething, but only has moments that he is miserable, and it's not been too bad.
--- I don't know why Landon likes Carson so much. He is so rough with him, and Landon doesn't seem to mind at all. One example - I walked into the living room, and Landon was on his stomach, Carson was straddling him, and then falling on his back!!!!!!!!!!!!!!!!!!!!!!!!!! and Landon wasn't complaining at all!!!! Carson grabs every single toy away from him (btw - we are working on that), throws stuff at him, pushes him, rolls him over whether he wants it or not, and is just plain rough, but Landon seems to enjoy the interaction. So I guess it's fine. (we do work on it with carson and it is better, but boy - they are going to have lots of fun wrestling in a few months)
I just always think back to when he was born - the whole ordeal of my water breaking 6 weeks early, labor not kicking in, delivering him VBAC (which I was so happy about), not being able to hold him, and him being in the NICU for 6 days, pumping, going into hospital to be with him, the jaundice, all of that - and look at him now! those bad memories are just a spec in my memory now, he is such a joy and blessing, and has no problems from any of that. Our life is normal now and so thankful for him!!!! 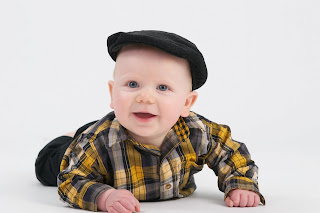 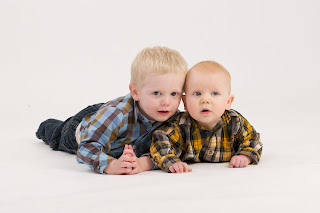 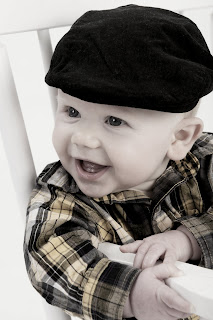 BTW - pics taken were the ones that our friends did - they do an excellent job!!!!!!!! We are so happy with them! and we have so many to choose from
Posted by Unknown at Tuesday, May 10, 2011

Those pics are adorable and it's amazing how quickly they change. KLV doesn't have a sibling but sometimes I cringe when we are with friends.

Wonderful pics of your kids! Adorable!! Love the banner photo of your family too!

Gorgeous kids! 8 months is a fun time. And there's more fun to come, as I'm sure you know!

Thanks for linking up with lovelinks!

What adorable pics! Babies are so much fun to watch them grown and learn new things.

Those are some cuties! I love the hat : )

Wow, you and three boys! I bet you are hopping from morning til midnight!

Happy 8 month to your little guy! Your photos are absolutely adorable!

Found you from Mama Wants This. Has anyone ever said you look a little like Amy Adams? At least in your banner picture!

The Reason You Come said...

Oh my, your kids look like dolls! They're such cutie pies! :D

I missed it too! But I did think of it this week and thought - wow, where did the time go?! And I LOVED being with him this past week. So, Happy 8-month day, Landon! He is such a happy and content baby - and so well behaved! You do such a great job as a mother!!!!