The other day we were out in the yard playing and stuff. We were starting our grill (that seriously doesn't work, and the charcoal never gets very hot, and it literally takes an hour to cook 2 hamburgers) and waiting for our friends to come over. I was busy in the house with the food, and Richard was playing with the boys. Then I walked outside and saw this. Can you find Landon??????? hahaha, he looks so little out there. I thought it was so funny that I took a pic and it looks even funnier in the picture. This tiny dot of a baby out in the yard all by himself. (I know the yard grass looks awful, and we rent, so we don't care that much) But Landon sat out there content as can be for a long time. Funny huh!!! 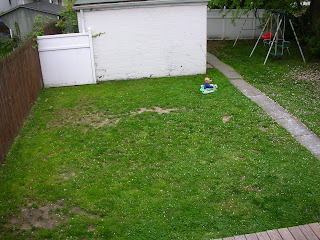 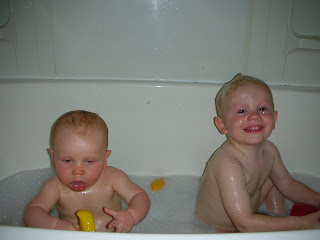 So I always see pics of people putting their kids in the bathtub together and I think, that must be so easy and way better way of doing it. One day I thought, "Landon is older now, he would like it, and we should try it". Richard was not too excited about it, but since I'm the mother he thought he would listen to me in regards to the boys baths. Well . . . it did not go well. I was so thankful that Richard was there, Landon could not sit up good in the water (the sloshing was making him topple) and Carson was afraid to sit closest to the drain where it was deeper, weird I know ha, it was chaotic and I just kept laughing while Richard was trying to actually clean them and get this thing over with. I kept laughing seriously laughing, I was crying, saying " this is terrible, why did I want to try this" hahahaha. Richard just kept giggling at me, but was more annoyed that he had to fix the solution while I kept laughing at how terrible it was turning out to be. So we gave it a month or so - and the other night I tried it again. it went much much better!!!! Both boys loved it, and sat great! and let me clean them. So now we will have combined bath times for a while.
Posted by Unknown at Saturday, May 21, 2011

This was such a funny story! Richard was probably so frustrated, but just had to put up with it because you wanted to try it. I can totally picture it! And that picture of Landon in the backyard was so funny. You could barely see him! I love reading your blog!

haha! combined bathtime saved my life! For quite a while, we bathed all three kids at the same time, until we deemed the daughter too old to be in the bathtub with her brothers. Even still, bathing the boys together saves us so much time.
oh and I love the pic of Landon all by his lonesome in the yard. so cute!

He does look so precious and tiny sitting out in that yard all by himself! CUTE! :D

I can't wait until the new baby gets here so I can take such pictures. Just beautiful. And what a great memory you have captured for your family!

Cute! He does look like a tiny little dot in the yard.