I know I've sorta driven this whole thing into the ground, so if you're sick of hearing about the race, don't read further, but this is a huge accomplishment for me, and "life goal" and I want to remember these details. (and honestly b/c I don't know if I'll do this race again, ever. :) )

The Horsetooth Half Marathon is a well known race among running community b/c of its difficulty! So why not make it your first half marathon ever so that everything afterwards will be easy. :)

I was nervous to say the least about this race! But I had trained, and even on the hills a lot, I slept way better than I expected the night before, and I ate a healthy nutritious breakfast. 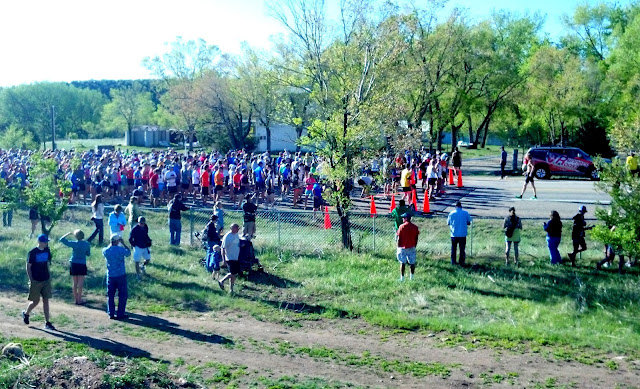 So the first 8 miles are extreme up hills and just as extreme down hills. I had trained these hills many times and knew exactly what I was getting into. I had places I stopped to walk and then run again all along the steep uphill. I also knew I could make up good time on the downhills. So the first 8 miles were good. i felt good and was ready to go, and mentally thinking, when I reach mile 8 it will all be easy peasy from there!
Then I finally got to mile 8 and time wise I was doing great! right on track to be at about a 2 hr race finish, which I was esctatic about! THEN - at about 8.5 it turned into a bike path that was wide open, dry, windy and very spacious, seemingly going on forever! I lost all my energy very fast. Maybe my pace was too fast at first, maybe I was dehydrated. Who knows. All I knew is I was tired and each mile after that took a life time. My next mental goal was to make it to mile 10 it will be easy peasy. Then I hit mile 10 and felt even more awful, mentally wondering if I was going to finish this thing. I lost a lot of time in those last 3 miles because I had to stop and walk. I am dissappointed that I had to walk so much at the end but over all still happy I finished this race.
My overall goal for the race was to finish under 2 and half hours. My chip time was 2 hrs 15 min and 13 sec. So overall I was happy but mentally knowing that if I wasn't so wiped out by the end I might've done a whole lot better. My average pace for the race was 10min 19 sec which typically is really slow for me but I think it was because of all the walking!
I have a friend (same one that won the 5 k I completed recently) who has done many half marathons in his life time (and believe it or not, got 2nd in this race) and he told me that was the hardest half marathon he has ever done! That made me feel a lot better.
I don't know that I can say yet I enjoyed the race. I'm very proud of myself for finishing, and very glad I did it! But overall it was hard. I had felt better on many of my training runs than I did that day. I don't really know why. Maybe I tapered too fast, maybe I should've run the day before, maybe I should drink coffee before races - either way it is what it is.
I was never really sore after my training runs either - but today I'm VERY sore! and expect tomorrow to be worse! I don't really know why - except I know that means I pushed my body as hard as i could've. I also have a friend that says "if you're not throwing up at the end you didn't push hard enough". well i didn't throw up, but I was dry heaving at the end. (and at mile 9 and 10 too!) does that count??????

Next goal - Run a flat/downhill half marathon and see how much time I can shave off :)
But maybe not till next year :)

You are amazing!!! I can't believe (well actually I can) you are talking about your next one!! I'm very proud of you too!! My hero!!!!!

Congrats, Jess! Take comfort that the soreness is normal and all part of the race experience:) I'm so glad you had a good group of ladies to train with too - I'm sure it made so much difference for you! You should be so pleased with your accomplishment!

You are awesome Jessica!! I think it is awesome that you finished a half marathon!

GREAT photos and comments! And I am incredibly proud of you. The 2005 Horsetooth was my first half and I can assure you that you will run a ton faster on another course. My half PR was last year's Colorado Half so maybe give it a shot next year. Rest and wallow in your achievement!

You should be very proud of yourself. You set a goal and stuck to it all the way to the end! And, I know that you will only do better - IF you ever try it again! I am proud of you! You are my hero!