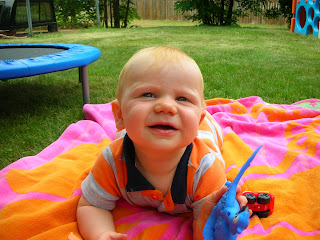 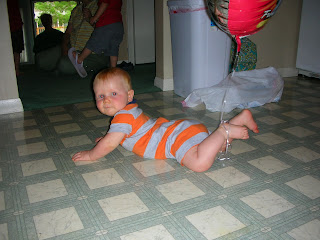 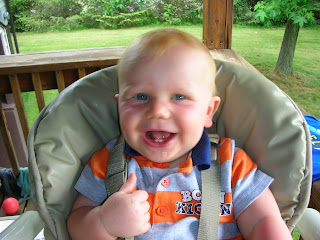 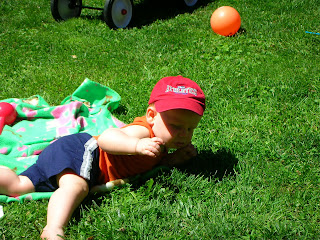 Landon is now Ten Months old!!!! Only 2 more months until he is 1 yr old! I can't believe it. I might venture to say that he is by far the easiest baby ever!!!!! The only time he ever cries is meal time when you can't spoon his food fast enough or get his bottle ready fast enough!!!!!
he sleeps 12 hrs a night and takes 2 wonderful naps!
this past month he really started to grow up. He claps his hands. He recognizes his name. He started crawling (although it's much more of an army crawl).
The other day I was sitting on the landing talking to Richard who was also on the landing (why were we there, i have no idea) and Carson starts yelling (in his only-mommy-comprehensive-words) "Landon climb up the steps, Landon climb up the steps" I turn while Richard keeps talking b/c once again, I seem to be the only one who understands his wide vocabulary, and sure enough Landon is picking himself up to the first step!!!! I love this stage when they start doing so much every week.
Landon and Carson are really starting to get along (but at the same time I've already seen some rivalry starting). They love to be on the floor together and are even starting to wrestle! And believe it or not - Landon is already starting to get Carson back for all the hardship he put him through. Now whenever I'm changing Carson's diaper on the floor, Landon crawls over as fast as he can and attacks carson's head and face. Carson of course flips out and says in his own way - "I don't want to wrestle with Landon". and me being the mean mother I am - just keep laughing at the ordeal b/c I know what Landon went through the first few months of his life with Carson.
The other day we were at a friends house who had a chicken coup. Carson had his fingers on the mesh fence thing and I was holding Landon. A chicken jumped up and pecked Carson's finger, and Carson did get pretty afraid of it (no harm done though) and Landon immediately started dying laughing at Carson. I cannot believe it!!! (and of course being the mean mother I am, couldn't help but laugh at it either) the interaction they are already having is so much fun.
I do have one question - What do other moms do when it reaches the stage of the younger one messing with whatever the older one is trying to play with? i.e. blocks, train tracks, puzzles etc. Landon loves to get right in with Carson, but Carson freaks out. Of course Landon doesnt' quite understand what exactly he's doing, and it's not necessarily bad - just not helpful. Besides distraction for the little one any other suggestions? the hard part is also - sometimes it's fine with Carson and other times it's not!
Anyways - it's a fun time for us. Although next summer will be even better b/c they will both be running around, and not one on a blanket getting bored fast!
Posted by Unknown at Monday, July 11, 2011

I love reading your posts and reading about the interaction of the boys! I can't believe 10 months has already gone by and that Landon is almost a year old! It sounds like the sharing and patience (of both boys) needs to be taught. That would be my recommendation!:-)