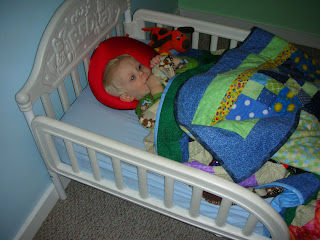 So many of you know that we just moved Carson into a Toddler bed about 2 weeks. Boy how I dreaded this transition. I thought he was too little still or that he wouldn't understand the concept and never stay in bed. I was anticipating the worst.
Well needless to say - it went fine without a glitch and he is so good at it. The first few days he did great. Then at naptime, I heard him starting to play on the bed before he went to sleep - I just had to go in and "speak sternly" (if you know what I mean) to him and I never heard him again. A couple of the mornings he woke up and was at the door crying when we would go in, but after a few "stern talks" he just stays in bed until I go in and get him. It's amazing. He waits there on his bed, until one of us opens the door and tells him he can get out of bed. "Well that was easy!!!!"
Before we moved him a friend had told me to not expect him to stay in the normal sleeping position, that he would move all over th eplace and not be under the blankets etc. Well I had been prepared for that, but was pleasantly surprised that he did stay in his bed and lay flat on his back pretty much the entire night. We did go in a place the blankets back over him a few times, but that's it.
Well last night was a different story - we went in like we normally do to check on him before we went to bed - and this is what we found - 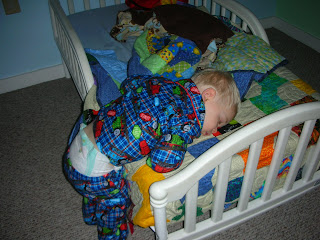 How does this happen? Was he up and then didn't make it back into bed? did he slip out? I wish so bad we had a video camera in his room to watch what went on. He didn't even flinch or wake up when I picked him up and laid him back down. So weird!!!!!
Posted by Unknown at Tuesday, November 30, 2010

This is SO FUNNY! I wonder what he was doing too! I love his cute little bed and I'm so glad he is doing so well. I can't believe how much he is growing. He is just SO CUTE!

bahahahaha! That is HYSTERICAL!!! I would have LOVED to see how that happened too!!! bahahahaha!!!

btw...LOVE LOVE LOVE your new blog look! (Don't worry about changing it around too much either...I do it ALL the time until it's PERFECT!!)

p.s. I am also in love with the photos of you and your 3 boys on the sidebar. GORGEOUS! (who took them??)

Haha- LOVE that last pic! It's so funny how they move around and fall asleep. So glad he is getting the hang of it though. We just switched Maddy to a toddler bed too. I can't believe how big our kiddos are getting!