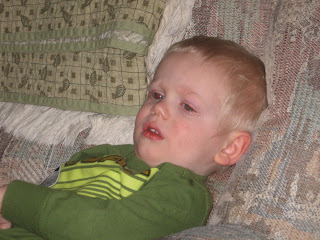 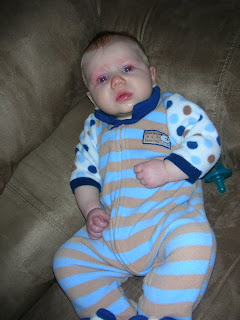 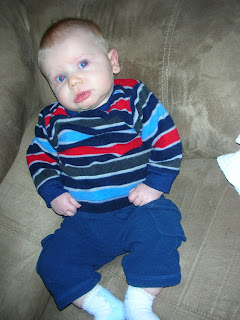 As many of you know - our house has been filled with sickness. But before I go on - I will say, it's not been terrible, and it's been much better than many friends out there who have been inundated with worse sickness. This I know - so I'm not complaining.
First it was Richard and I. Richard had a sore throat, cough congestion, aches and fever for about 5 days before starting amoxicillan. I of course only get my nasty cough that lasts forever and gets better just in time for another round of coughing. Its been like this my whole life and I'm pretty used to having congestion and a cough for about %50 of my lifetime. But I've never seen Richard sick for so long with a fever. Once we started feeling better our boys now have gotten it. Last week was Carson. Poor guy, fever for a couple days on and off. Just when you think, ok we're through this today he's doing better, he has another fever and looks pathetic again. This week it's Landon. I had thought he had escaped this sickness (nursing and everything) but just when I thought we were out of the woods, he came down with his first fever. :( It's the saddest thing. So this week, we're back to sitting on the couch cuddling as much as possible. I am nursing a TON (and I'm not kidding, in 14 hrs, I think i nursed him 8 times!!!!!!!!!!!!!!!!!!!!!!!! no dehydration here) and cuddling a lot. Landon is definitely more attatched to me than Carson ever was. And I must admit there is a little glimmer of joy, when he's in someone else's arms or in the rocker or on the couch and I can see him looking longingly at me so that I will hold him close. :) (that will probably change when the crying comes with it). And just like Carson, right when I think we made it through and there's no fever for 24 hrs, it comes back and we're on the couch again.
That's been our few weeks. But I'm so thankful first of all, for health, being sick makes you so appreciative of your health. I'm thankful it hasn't been that bad compared to a lot of other stuff people have caught, and I'm thankful that my schedule can allow these lazy days at home with my boys cuddling them to death.
Posted by Unknown at Friday, March 04, 2011

I really hope this is the end of the sickness for your family this week and for this winter! In reading this today, it makes me wish I could hold your boys. I LOVED holding Landon when I was there and although I never want to see them sick, it is nice to hold them when they're so cuddly! Praying everyone gets well SOON!!!!

so sorry to hear of so much sickness, sounds so miserable. :( hopefully the sun will come out soon and chase the winter germs all away! hang in there!