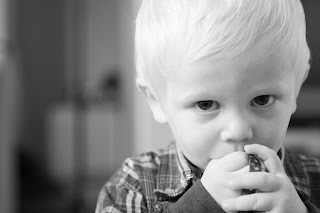 I have a picky, defiant toddler. :( (and by looking at this innocent picture you would never know it)
now - let me take you back to my childhood. I was not allowed to be picky. and growing up in a third world country ate a lot of things some people would never imagine eating. (guinea pig, lots of raw red onions in everything, chicken foot soup, whole roasted pig, and things from the stand on the side of the road that would horrify any normal american) but b/c of my childhood and strict parenting I was under, i now eat anything and love all food, sometimes the veggies and fruit even more than the processed food.
Now i have a picky toddler. it makes me so sad. He ate all fruits and veggies that I gave him in babyfood form with no problem, and I mean all veggies. No hesitation whatsoever. As soon as we switched to adult food form he got picky. Or it had something to do with the fact that he was realizing he could potentially control something. also combine that with his awful gag reflux.
Now I am a strict mom and firm believer that my child does what the parent wants, b/c I know better than he does at 1 and half years old. (not being egotistical just biblical in my opinion). I also have ZERO tolerance for picky people. :(
This means our dinner times are filled with lots of screaming, crying, food sitting in his mouth for A VERY LONG TIME, and gagging until throwing up point. yeah, somedays I dread meal time. and even if I give him soemthing that I know he has eaten and loved before doesn't mean he will eat it this time. :(
This morning I had a glimmer of hope that i might be winning this battle. We had homemade pizza last night (note: he loves pizza normaly). But we have had an exceptionally trying week in the food area with him. And he refused to eat it. and without going into detail, went to bed with no food in his stomach and no playing time with daddy. :( (breaks richard and I's heart to pieces to see him fight us so much). I pulled out the same plate of pizza for him this morning, and cut up 5 pieces and put it in front of him, stating he could not have anyting else until he ate those 5 pieces. After a little crying, he did eat the pizza and then got his beloved banana (which by the way, he has fought a little this week, weird, b/c he LOVES bananas).
I've been fighting this battle for probably 8 months straight or more. And I see no sign of improvement on his part. I question myself a lot, but in the end know that as the parent I decide what he is eating until he is buying it and making it himself. Here's to trying to be more stubborn than he is . . . .
Posted by Unknown at Thursday, February 03, 2011

You are doing a great job!! Just keep at it. That is something i have to tell myself alot "I am more stubborn than you are":) Your a great mom and doing a fantastic job with both boys. I don't think i could do what you do:) Love ya!! I love your blog!!

You know it's worth it, from your own childhood. Keep up the good work, because many people, including him eventually, will appreciate it! (Jason was picky growing up, so he hated church socials because he was afraid to try anything new.) Don't grow weary in doing well. :)

Aww...keep it up Jess! You and Richard are great parents :).

Carolyn never ate much baby food, but I made my own by smashing up vegies, etc... and she ate that fairly well. She was eating everything I gave her, in fact, and then she suddenly realized that she could refuse something and I couldn't make her swallow it. So, I don't think it was the "transition" but just our kids trying to exert their will over ours. :) Carolyn hasn't been a constant problem, but she has gone to bed without a meal before. I understand your pain, but I also know that you are doing the right thing! Someday our kids will thank us because they are going to be much healthier and will learn to eat anything. I have started "hiding" some vegies in main dishes with Carolyn. She seems to do better with a mixture of tastes rather than just eating all of her peas at once and then getting the rest of her meal. Its not like she can't see or taste them, but she seems to enjoy them more when she has just eaten something else beforehand. I've also had her refuse everything she normally likes...and I was at my whits end until I realized that she just wanted a bite of what was on my plate....lasagne and then she ate everything else I was trying to give her before. I think sometimes the difficulty might be that they are trying to communicate something to us and we aren't getting it. Signs have helped me, but I'm looking forward to her talking more. :) Then there are also times when she is just being stubborn. She just needs to submit to her authority and is testing the boundaries. They all do that, no matter where you place them. Changing the boundaries won't help, because they will go on testing them until they find out where they really are.
Well, I hope this was encouraging to know that you are not alone! Keep up the good work!

you are not alone...

I think almost every child does this to some degree or another, so hang in there! Graham was the same in that baby food was no problem, but when it came to the real deal (textures apparently play a HUGE role!)it was weird at first to see him so resistent. dinner was always the hardest meal for us as well. there were many nights when he only ate a few bites, but he didn't seem too bothered by it (hunger), so I didn't worry about it too much. I have just realized in the last month or so that he's really eating good dinners and it has become so much smoother. So I say, hang in there, continue to make him try a few bites, but don't stress about it too much. I think if you're consistent with good meals it will pay off. good luck!

Lizzy was a very picky eater. The only thing she loved was breast milk then cow's milk when she was two. Sounds like you have a great way of approaching it :)

You are doing a GREAT JOB, Jess! In the big picture, you will win this war - maybe not every battle, but definitely the war!:-) He will get it and just keep up the consistency. That's the key! It sounds like you're really doing it exactly right! LOVE ALL OF YOU - - -

I wish I had some tips to give you, Jess, but I don't! Just know that you are not alone...I think it's pretty normal for kids to try to find a way to act out their own volition. They just all do it in different situations and to varying degrees. When I feel myself getting frustrated, I pray that God would help me to show Serena the patience, compassion, and unconditional love that He has shown me! I wish I could say that I am always successful! :P The whole situation of rebellious kids is compounded by parents who also have a sin nature, right! I'll be praying for you to have wisdom! Love ya!