A day for the History Books

This past Saturday we got to do something that will forever be remembered hopefully.  If you've known my husband and my boys for any amount of time you know they are die hard Broncos fans! The Broncos put on a show for their fans every year. They open up their stadium for their fans to watch a practice and a scrimmage for free right before Pre season starts. We decided to go and see what it's all about, knowing that we will probably never have a chance to see a real game :) 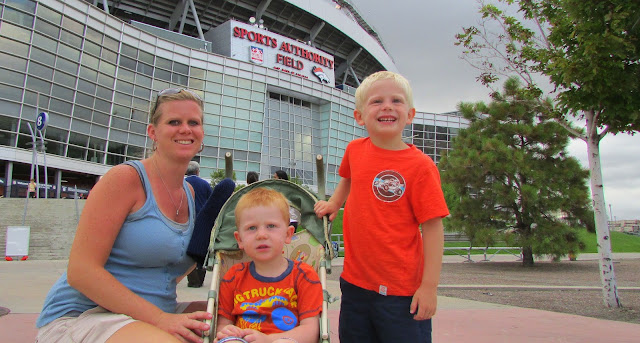 Well the morning/afterncgoon didn't turn out how we expected due to Richard's work. (that's another whole story in and of itvself). But in the end we decided to still try and go. We left our house a little later than hoped and it also happened to be the years biggest hail/rain storm that hit. It was crazy. Now you also know that Richard works for home insurance companies when they have some sort of water damage or fire damage. So his phone lit up the whole evening. He was of course on call and was taking them. We were stressed out that we would have to turn around and go back home the whole time! For some reason - we never did have to go back for him to go to jobs, but all that I don't really understand about his work. Anyways - after our car having issues multiple times getting down there to Denver (which is another story for another day) (I have a lot of those in this story), and phone calls galore about work - we eventually made our way to the stadium. We got there about 6:30. The practice was supposed to start at 7pm and the actual scrimmage at 8pm. WE found good seats and were super excited about it. The boys were in AWE. And really the crowds weren't as bad as we were anticipating.

Shortly after we got situated with a little food - the wind started to blow, the lightening and thunder started. (now if you know me at all - this is worst case scenario for me). We went back into the section where food and bathrooms are and decided to wait it out. B/c what storm in Colorado really lasts that long???!!?! Well apparently this one! It downpoured for a very long time. I mean DOWN POURED! People slowly kept coming under the shelter literally soaking wet, giving up on the the hopes that the rain would stop shortly. 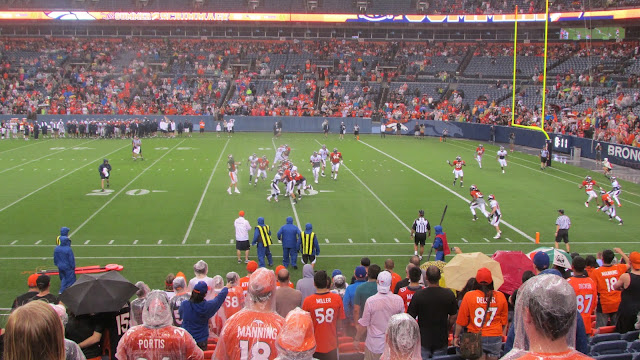 Finally it started to slow down. The players came out on the field. and the people who wanted to stick it out ran back out to the seats. By this time we could get really good seats. Of course we forgot our huge wonderful umbrella in the car, due to the confusion of work calls non stop before we left it. :) They practiced a little and then started a scrimmage. The field is soaking wet, it's pretty chilly and I'm sure they don't want to cause any inujuries right before the season. So they didn't scrimmage very long, just enough to give us a little show. Then it was over. WE were able to get an autograph - but we only had two ball caps and the sharpie didn't work well on it b/c of course it was sopping wet. :( Oh well there is a little bit of a "D" on it. For number 30 - but I have no idea what his name is. :) 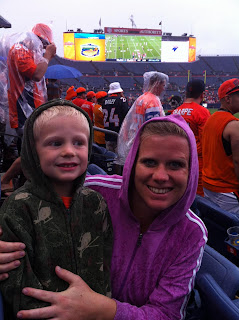 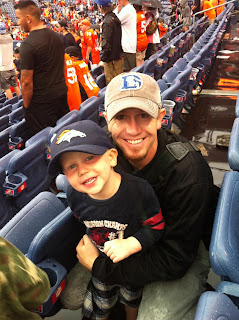 Even though pretty much nothing about the day worked out how we planned or thought - we truly had a great time. The boys were in awe and thought it was so cool. We have great memories as a family - and we were as close to Peyton Manning and Vaughn Miller as we will probably ever be. :) 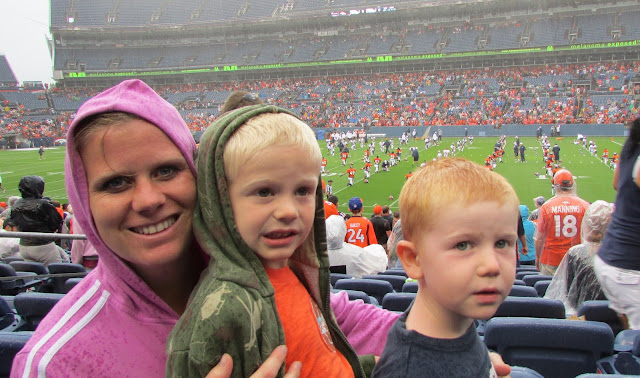 I don't think it will even matter about the rain and the non-autograph! The memories will be forever and it sounds like you all had a great time! What wonderful memories!!