Pirates and Lions Oh My!

I'm one of those party pooper moms who hates dressing up. :( I never have enjoyed dressing up for parties and almost hate doing it. I like to think I'm not creative at all - but really it's b/c I don't like to put the effort into it.
Also growing up in Ecuador - Halloween was not celebrated and really dressing up and costumes is not really part of the culture at all. So I'll blame it on that too.
And now to think I need to think about it for my kids too - ugh! was my first reaction. i also did not want to spend a lot of money, but didn't want just one of those suits you buy in the store either. So I perused the shelves and just hoped that I would find something cheap and that I could make work. I also had no real intentions of doing it up big and no party was planned so I knew it was no big deal. As time came closer my friend, Jamie (who has a 2 yr old), told me that "Old Town" (downtown area) was having a time for stores to hand out candy to kids from 10am-1pm on the 31st. So i decided to go, but then I sorta had to get serious about costumes too. 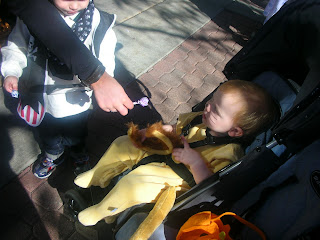 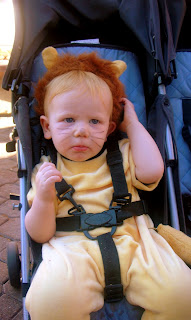 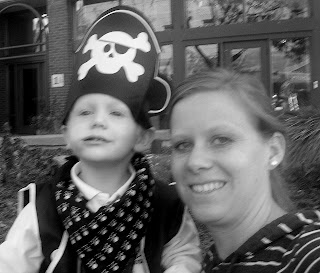 I had so much fun during the day with the boys and with my friends - that i decided we would go out that night around our neighborhood so that Richard could join us.  I was like a little kid so excited about this whole experience.

I think the funnest part for me as the parent was everyone's reaction to your kids. They all say how cute they are, and are so happy to see them. It was so much fun watching the boys try to pick out one candy, and the adults just thinking it was adorable when Carson would say "thank you".

I also thought - What a perfect way to meet people in your community. We stopped by an older ladies apartment who I've met and talked to - just to say hi with the boys, and she was so encouraged and thankful that we would stop by and see her for Halloween. What a great testimony to her that I actually care about her and think about her. Another lady - remembered handing candy out in "old town" (she works in a store) and remembered our boys and then talked about where we live and was so friendly. It really was great!!!!
We walked around for about an hour or so with Jamie and Gary and just laughed at the boys and had a great time! By far the funnest Halloween ever!!!!!

I'll have to post pics of our night out once I get copies of them - we took pics with Jamie's camera. :)

I didn't realize you were there with Jamie & Gary - that's great! you did an awesome job with their outfits! I am convinced that Halloween is the best night out of the year to be out in your community because it's the ONLY night everyone else is out as well!

My son is looking at this with me and loves your son's pirate hat. So cute and looks like you had a great Halloween. Thanks for linking up!

I'm so glad you had such a good experience for Halloween! Maybe you can live your childhood through your kids!:-) You did great on the costumes too!!!!

I am so glad you were able to do that!! They looked so cute and you did a good job with their costumes. My boys were sad they didn't go. We aren't allowed to go while we are on staff here. Miss you!!