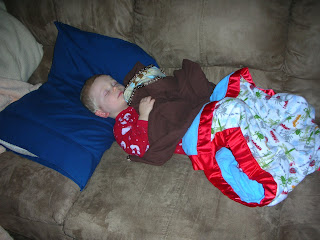 Carson has been very sick this week. There is only one other time he has been sick that he just lays around and that was only a high fever.
On monday night he started throwing up at supper time and didn't stop until about 11pm. :( He was so sad to watch. He had never experienced that before and the fear I saw in his eyes every time he would start to gag and I would put the bowl up to his mouth. He would shake his head and look at me as if to say " No, not again, make it stop"!!!!!!!! He would just scream in between gags until that episode was over and then huddle down in my lap and fall back asleep. It was awful as a mother to watch. I kept saying "it's ok, don't worry". But he still looked so afraid and confused about what was going on. I just wanted to throw up for him. He slept with us that night for the first time ever. but I didn't want to be running into his room ever 15 min to hold the bowl up to his mouth, plus I didn't want him to be all alone. Thankfully he stopped dry heaving about 11 and he slept through the night with us. The next day on tues he was at least keeping liquids down, but didn't eat much more than a handful of kix dry cereal.
Today he isn't much better, except I've gotten some gatorade and a few saltines in him today. Still lays around sleeping. After a while tries to get up and play and then climbs back into my lap to rest. :( I keep offering all kinds of food - food that's good for an upset stomach and food that I know he likes. neither of which does he take more than a bite of. I'm just thankful for the 2 and half glasses of gatorade he's drank.
I hope I get my spunky little toddler back soon. and that no one else in the family gets this bug!!!!
Meanwhile - we've had 2 pajama days at our house and I haven't accomplished very much at all. Phew - how can I be so tired though. :)
Posted by Unknown at Wednesday, December 22, 2010

Jessica, I hope he feels better quickly. Megan has had a couple of bouts with vomiting (when she was younger...we realized after the 2 times she was allergic to bananas), but the worst was when she had diarrhea for like 6 days twice. She got the same way as Carson...no energy just wanted to be held or laying in my bed watching a movie. I couldn't get her to eat anything or drink much either. So hard to see as a parent. Hope he turns into your energetic boy soon!

I'm so glad he's feeling better NOW, and I hope he's back to his total normal self soon. I remember those days with you, Jess, and it is so sad. You enjoy being able to hold your little one, but so sad that it takes them getting sick for that to happen. This is TRUE motherhood - when they get sick!