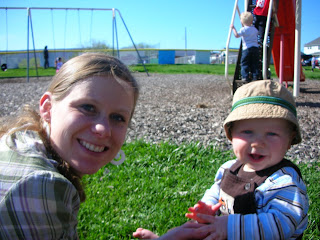 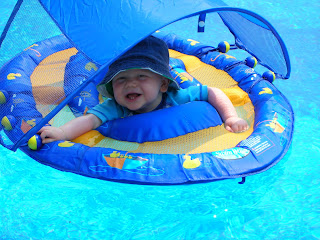 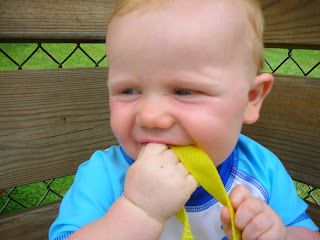 I was debating all day what to post for the "post of the day". Should I post a picture for Wordless Wednesday? Should I write a post about my marriage for the June Project Marriage post? Should I write about another day in the sun? All questions i was thinking about today until I was talking to a friend and realized that Landon is 9 Months old today!!!!!!!!!!!!
I will probably sound repetitive - but . . . I cannot believe this kid. exactly 9 months and almost 4 days ago, my water broke on Sept 8th. (Now my Due date was Oct 14th!!!!) The thoughts that went rushing through my head on that day were unspeakable. (it was a sunday and church that morning was not a good idea for me, I knew something was wrong) I was scared, worried, anxious, and had a lot of questions. I thought my baby is going to be born today, and I don't have ONE thing ready for him. Richard rushed around in the basement finding an outfit to bring him home in, and blankets, and getting out the car seat. I was trying to "waddle" around to put stuff in a bag for myself (b/c for anyone that doesn't water breaking is not like the movies and sorry for the bluntness but it never stops), and Richard was also on the phone trying to figure out what we were going to do with our 1st born son! (17months old)
I was pretty emotional that day, and cried a lot! So many emotions. But Landon was not born that day, or the next, and had to wait until the next night (tues evening) before labor even started. I labored all night and My precious Landon was born at 5:30 AM weds Sept 8th!!!!. I got to hold him for about 30 sec. and they wisked him away (if you want to read about my birth story go Here, I love it b/c I am just so grateful that it worked out the way it did). They had warned us (we were in the hospital long enough and seen enough docs and nurses to be explained everything!) that he would probably need help breathing and that he would probably be in the NICU for a while. So I was ready mentally for them to take him so soon, and for me not to be able to feed him right away.
I can't explain the feelings that go through you when you give birth, but then can't hold your baby, you get transferred to a new room but no baby, people visit you, but no baby, and you go home but no baby!!!! I recovered very fast which turned out to be good, b/c I was walking a ton - back and forth from NICU and once I got home, I tried to spend as much time as I could in the NICU so I could feed him as much as possible! Needless to say, I was exhausted and Very Emotional!
Anyways, enough about the hard days - he came home 6 days later and has been THRIVING since!!!! I have noticed he is a little delayed with his "development" but nothing I'm worried about!
He is doing so good - so happy and Smiley.
He is close to crawling but not quite yet. He rolls all around the floor, but has gotten up on all fours a handful of times. it's only a matter of time. And has a PERFECT nap schedule
He loves attention - he GRINS SO BIG when Carson and I go in and get him. Every time you go up to his face and say "landon" his face lights up!!!! the most laid back baby ever - unless it's meal time - then you better watch out - he gets mad. Or if he is getting sleepy and I walk away from him. Otherwise he is so happy and easy going.
He puts up with so so much from Carson . . . but at the same time I think he likes the attention from Carson. they grab at each other and roll all over each other. (just trying to figure out how to tell Carson that there is a line that he shouldn't cross and it usually is right about when Landon starts SCREAMING for help). Every time I get Carson up in the AM or from a nap he looks at me and says, "Go get Landon?" then puts his finger up the his mouth and says "SHHHHHHH". I guess I did that one time so that Carson didn't go barging into his room and wake him up - and now Carson always does it. So cute! Another thing that is so cute between the two of them - Lately as soon as Landon is done with his food, Carson says "Landon get down". Then once Landon is down Carson says, "Landon other room to play". I LOVE IT!!!!!!
But looking back at that week of our lives to now - boy have I been blessed. (I also realize our situation as hard as it was to go through is nothing compared to others)
Sorry this post got so long
guess i got a little long winded.
I'm just blessed!
Posted by Unknown at Wednesday, June 08, 2011

Sorry I missed it but Happy 9 Monthday to Landon!!!! He is such a special gift to all of us! The pictures are absolutely adorable and I already miss him! I can't wait until I can see him again! I just praise the Lord that he arrived, he is safe and healthy, and he is such a good baby for you!