So It's been quite a few weeks in my immediate family - with my mom with some health problems. Without going into too much detail - she had surgery and is recovering very good from that. And we were thankful to find out that the tumor she had was benign so we did not have to face Cancer. She had her surgery in Altoon PA (3 hrs from here) so I drove down there for a few days and helped her and mostly just kept her company. I loved the 2 days I took off of work and the extra time to read and make jewelry, plus I got to see my sister and her boys.
Carson still is not walking - although he likes to walk on his Knees. hahaha. He'll walk all the way across the room on his knees without even going onto all 4s to crawl. His shins have bruises on them from walking like that, but he is starting to even refuse to try to walk when we try to have him stand. Oh well. I guess it will happen when it happens. For months now he has been walking along furniture and holding on to things, but everytime he realizes you're trying to get him to let go and stand on his own or take a step towards daddy, he falls to his knees. I thought that he would be walking by Christmas time b/c he went from crawling to standing so fast, but i guess I was way wrong.
I was starting to think that Carson would never learn to do things b/c he just doesn't pay attention when you talk to him or try to teach him things - but finally he is clapping and kissing (which by the way - the cutest thing ever) and sometimes I think he is trying to imitate words that we say, like "boo" or "dadda" or "mamma" or "bravo" or "yeah". but it seems slow going. (coming from the impatient mother hahahaha). He is developing such a cute personality and loves attention, Gets into anything he can - but knows his boundaries. he moved up to a bigger kid nusery (not the baby nursery) and I peaked in last Sunday and he was sitting at the little table eating animal crackers with the other kids - I can't tell you how my heart skipped a beat with love and adoration for this little guy that is getting bigger and cuter every day. :-)
I know I say this every post - but I just absolutely love spending my days with him and being his mother.
For Valentine's Day we had a big weekend. :-) Richard had asked Melissa (his sister) to watch Carson overnight and we went to a place in the poconos and spent the night. I was super excited about it, but as it got closer I got more and more anxious about leaving him. I was fine after we left him and he really did fine without me. :( we had a great time by ourselves and really just relaxed a lot. We watched a movie (When in Rome) which was cute. Went out to eat, and then shopped at some outlets. it felt like how it used to be before Carson was born. But boy did I miss him and we were fighting over who was going to get him first once we picked him up. hahahaha. I was so thankful to get away like that and relax and not wake up to feed someone else breakfast, and I'm so thankful for a husband who planned that for us. Of course we don't have any pics b/c Carson wasn't with us - and i didn't buy any clothes except for him - I guess b/c I'm a mother now. hahahah 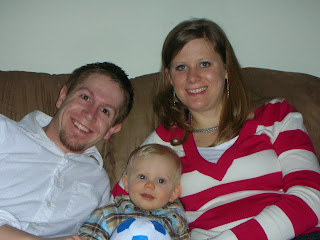 So that's the update on us Gardners. 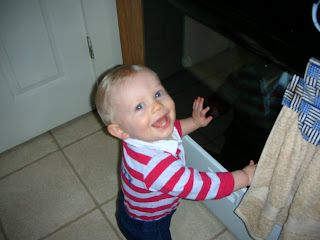 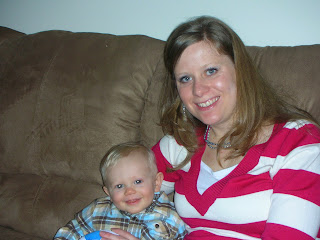 How nice that you and Richard got to get away for a night! Sounds like a lot of fun. Gotta love those kisses from you baby as well. Glad you are enjoying life as a mom!

I appreciate your PO very much the article with the picture. Continues to refuel!!

Carson is such a cutie! It's fun to hear about what he's up to!

we have not had a night away yet (mostly because we don't live near family) :( but I am both dreading it and looking forward to when we finally can!
Graham cruised around furniture for a good 3 months before even thinking about taking a step!! and he still doesn't really say any words. a couple, that only we can recognize. :) but I am told that boys usually communicate later than girls.
congrats on baby #2 - hope you get to feeling better very soon!