It seems that we always do something big for my birthday instead of our anniversary. The timing has just worked out better. Last year we were still in CO for my bday and on our annivesary we had just moved to Scranton. This year, we knew that NOvember would be a terrible time to try to do something because its close to the end of the semester for Richard, we will probably be moving into a different apartment, and I will be a lot larger (bellly wise).

So we planned a little gettaway, and tried to do it as inexpensively as possible but it was really fun. Friday night after work we got everything packed up and drove to a state park not too far from here and camped. Of course the weather here has been so AMAZING for like 2 weeks prior and the whole weekend/week after our camping trip. But the one night we decide to camp there is rain predicted, and yes it did rain. But it was just a steady drizzle and didn't really make it miserable. We got there and set up camp, then took a walk, (we had rain ponchos) and then when it got dark we went inside the tent and just read for a while. 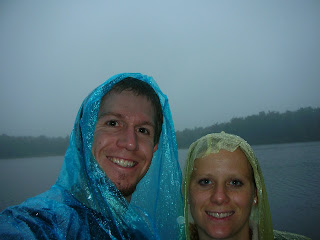 We were both pretty tired from the whole week, (and I seem to be constantly exhausted lately) so that wasn't bad for us, and we really had a relaxing time. By morning the rain had stopped and it was a beautiful camping morning. 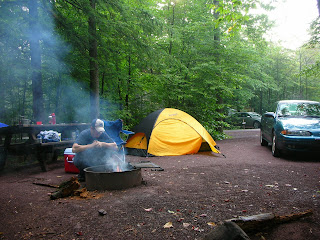 We lounged around a little and then went for a hike. 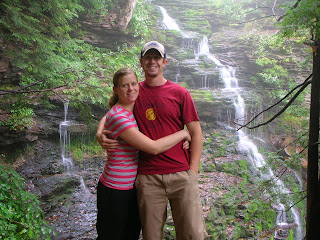 Of course if I was my normal self this hike would've been a breeze, but by the end of it I was pretty tired, but very glad that we did the hike. We had lunch by the lake front at the park, then started our drive down to Doug and Steph's house.( Richard's brother and sister in law).

There we chatted for a while, then went for supper with some old friends from college. Its so fun to reconnect and spend some time together. Its fun to chat about how our lives have changed now. I think I will forever be friends with the people I went to school with. There is just a funny connection.

We woke up early Sunday morning and started our drive to NYC. I had never spent very much time there, but it was so cool. Doug and Steph helped us a lot with knowing where to park, and explaining a little about the subway/train system. We didn't have much planned but just wanted to see the city. First we went to Battery Park where we were going to get in line for the ferry ride, but we would've had to wait for a very long time and it was more expensive that we originally thought. (and we were trying to do this as cheap as possible). 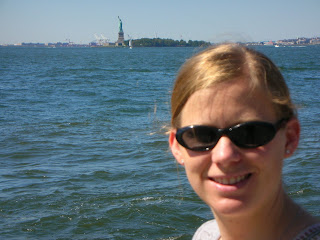 Richard had done it before and I was fine with seeing the Statue from far away, and so we were both content with that. (we both are pretty layed back about things like this). Then we went up to Times Square and walked around a lot. 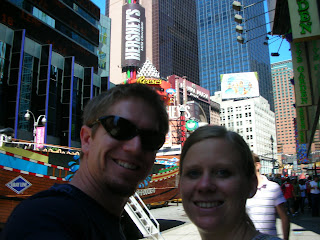 There is so much to see and all of it is so interesting. WE took a walk up to Central park. 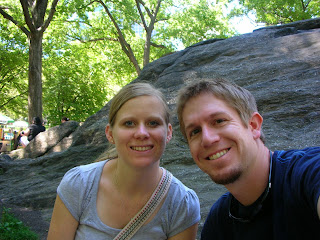 But come to find out, that park is huge with so much to do in it. We only saw a little part on the southern end of it. But it was still cool. By that time I was pretty tired. So we rested and just people-watched. NYC is the best place to do that. After that we walked back down to 34th Street and saw the Empire State Building, walked through the famous macy's, which by the way is so big. It was so incredible how big it was. By about 3pm we started heading back to our car.

We had made reservations at a restaurant called the Melting Pot that was located on the Jersey side on the water front facing the city. It was pretty easy to find and was such a great experience. It is a little pricey(the only thing we splurged on:-)) but you don't regret it. I could go on and explain all he food we tasted but it really wouldn't mean that much to you guys. But needless to say, the atmospher, the food, the experience was all so much fun. 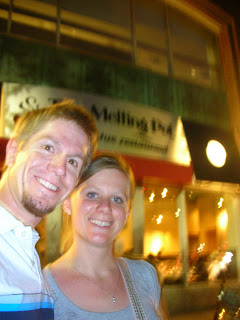 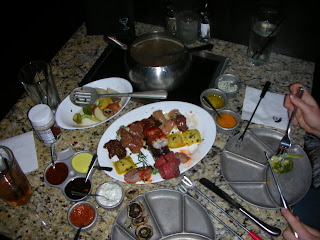 WE finished pretty early about 8pm and walked around the waterfront which was so cool. 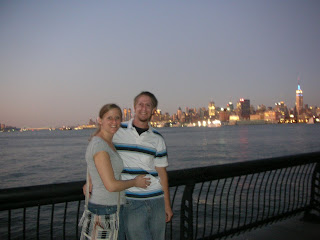 Then drove the 2 hour ride home. It was such a fun weekend. We enjoyed ourselves so much. And one of the best parts of the weekend, is we still had labor day off (my actual birthday) so we could rest and get ready for the busy week ahead. It was so great. We will remember it forever. :-)
Then on Monday night, Melissa (richard sister that lives here in the area with us) came over with a beautiful cake that she made for me and a very very cute purse that she made. Perfect way to end my birthday. (Although I did miss being with my twin, and the rest of my family) 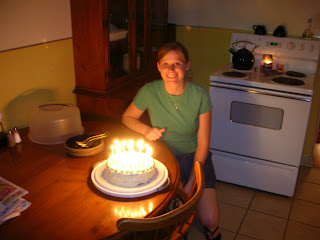 Oh wow! Sounds like such a great way to celebrate your birthday! It was fun to hear about all the details! :)

Glad you had a great birthday and were able to get away!!

Wow - what a great birthday. Can't believe you guys walked that much in NY. We were there over thanksgiving and loved all those same spots.

How many candles are on that cake??? It looked like you could've burned your house down. You can't be THAT old, can you??? Anyway, it was so fun reading about your weekend and I'm so glad you had such a good time! We missed being with you and Jerelyn too. One of these days maybe we can be with you on your birthdays again - like the good ol days!!!:-)